candidates that form covalent linkages with their target proteins have been underexplored compared with the conventional counterparts that modulate biological function by reversibly binding to proteins, in part due to concerns about off-target reactivity. However, toxicity linked to off-target reactivity can be minimized by using latent electrophiles that only become activated towards covalent bond formation on binding a specific protein. Here we study sulfuramidimidoyl fluorides, a class of weak electrophiles that undergo sulfur(VI) fluoride exchange chemistry. We show that equilibrium binding of a sulfuramidimidoyl fluoride to a protein can allow nucleophilic attack by a specific amino acid side chain, which leads to conjugate formation. We incubated small molecules, each bearing a sulfuramidimidoyl fluoride electrophile, with human cell lysate, and the protein conjugates formed were identified by affinity chromatography–mass spectrometry. This inverse drug discovery approach identified a compound that covalently binds to and irreversibly inhibits the activity of poly(ADP-ribose) polymerase 1, an important anticancer target in living cells. 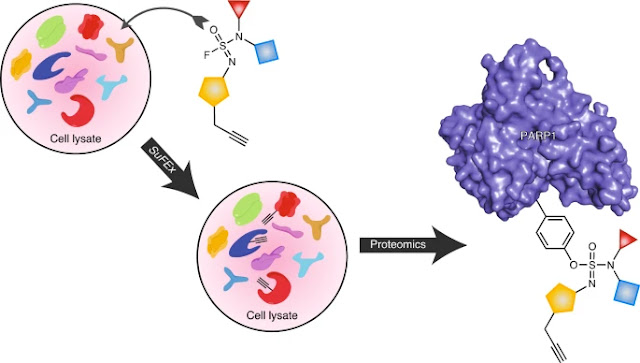