Proteolysis targeting chimeras (PROTACs) are heterobifunctional small molecules comprised of an E3 ligase recruiting molecule and the ligand for a protein of interest (POI) connected by a chemical linker (Figure 1). The first PROTAC utilized a 10-mer amino acid peptide to recruit Skp1-Cullin-F box protein β-TRCP, an E3 ligase complex, to methionine aminopeptidase-2, the POI, for ubiquitination and degradation.(1) In the ensuing years, the field has moved beyond peptidomimetics to small molecules. Currently, only a handful of E3 ligases are commonly recruited by PROTACs, namely Von-Hippel Lindau (VHL), cereblon (CRBN), MDM2, and IAPs. There are, however, >600 E3 ligases in the human proteome. The broad applicability of VHL- and CRBN-based PROTACs, coupled with the lack of tractable ligands for other E3 ligases, has resulted in an E3 ligase space that is underexplored. While current PROTACs have been shown to degrade a wide variety of biologically native and non-native E3 ligase substrates, ranging from traditionally druggable targets, such as kinases, to those previously considered “undruggable”, such as KRASG12C, there are substrates that have remained elusive, notably tubulin and c-Myc. 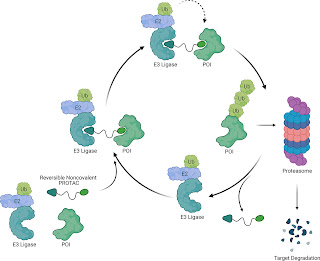