Methylglyoxal (MGO) is a reactive byproduct formed by several metabolic precursors, the most notable being triosephosphates in glycolysis. While many MGO-mediated adducts have been described, the reactivity and specific biomolecular targets of MGO remain incompletely mapped. Based on our recent discovery that MGO can form stable mercaptomethylimidazole crosslinks between cysteine and arginine (MICA) in proteins, we hypothesized that MGO may participate in myriad reactions with biologically relevant guanidines and thiols in proteins, metabolites, and perhaps other biomolecules. Herein, we performed steady-state and kinetic analyses of MGO reactivity with several model thiols, guanidines, and biguanide drugs to establish the plausible and prevalent adducts formed by MGO in proteins, peptides, and abundant cellular metabolites. We identified several novel, stable MICA metabolites that form in vitro and in cells, as well as a novel intermolecular post-translational MICA modification of surface cysteines in proteins. These data confirm that kinetic trapping of free MGO by thiols occurs rapidly and can decrease formation of more stable imidazolone (MG-H1) arginine adducts. However, reversible hemithioacetal adducts can go on to form stable MICA modifications in an inter- and intramolecular fashion with abundant or proximal guanidines, respectively. Finally, we discovered that intracellular MICA-glutathione metabolites are recognized and exported by the efflux pump MRP1, providing a parallel and perhaps complementary pathway for MGO detoxification working alongside the glyoxalase pathway. These data provide new insights into the plausible reactions involving MGO in cells and tissues, as well as several new molecular species in proteins and metabolites for further study. 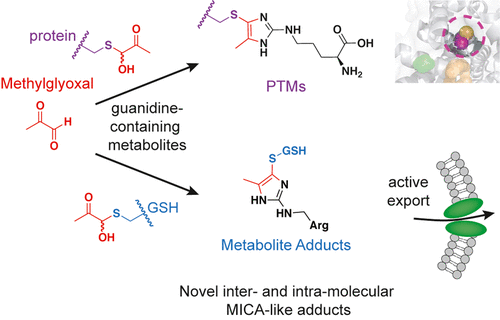