Most known probes for activity-based protein profiling (ABPP) use electrophilic groups that tag a single type of nucleophilic amino acid to identify cases in which its hyper-reactivity underpins function. Much important biochemistry derives from electrophilic enzyme cofactors, transient intermediates, and labile regulatory modifications, but ABPP probes for such species are underdeveloped. Here, we describe a versatile class of probes for this less charted hemisphere of the proteome. The use of an electron-rich hydrazine as the common chemical modifier enables covalent targeting of multiple, pharmacologically important classes of enzymes bearing diverse organic and inorganic cofactors. Probe attachment occurs by both polar and radicaloid mechanisms, can be blocked by molecules that occupy the active sites, and depends on the proper poise of the active site for turnover. These traits will enable the probes to be used to identify specific inhibitors of individual members of these multiple enzyme classes, making them uniquely versatile among known ABPP probes. 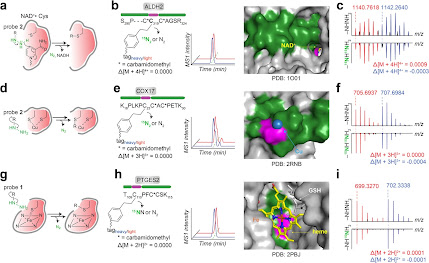