Disulfide bonds between cysteine residues are important post-translational modifications in proteins that have critical roles for protein structure and stability, as redox-active catalytic groups in enzymes or allosteric redox switches that govern protein function1,2,3,4. In addition to forming disulfide bridges, cysteine residues are susceptible to oxidation by reactive oxygen species, and are thus central not only to the scavenging of these but also to cellular signalling and communication in biological as well as pathological contexts5,6. Oxidized cysteine species are highly reactive and may form covalent conjugates with, for example, tyrosines in the active sites of some redox enzymes7,8. However, to our knowledge, regulatory switches with covalent crosslinks other than disulfides have not previously been demonstrated. Here we report the discovery of a covalent crosslink between a cysteine and a lysine residue with a NOS bridge that serves as an allosteric redox switch in the transaldolase enzyme of Neisseria gonorrhoeae, the pathogen that causes gonorrhoea. X-ray structure analysis of the protein in the oxidized and reduced state reveals a loaded-spring mechanism that involves a structural relaxation upon redox activation, which is propagated from the allosteric redox switch at the protein surface to the active site in the protein interior. This relaxation leads to a reconfiguration of key catalytic residues and elicits an increase in enzymatic activity of several orders of magnitude. The redox switch is highly conserved in related transaldolases from other members of the Neisseriaceae; for example, it is present in the transaldolase of Neisseria meningitides (a pathogen that is the primary cause of meningitis and septicaemia in children). We surveyed the Protein Data Bank and found that the NOS bridge exists in diverse protein families across all domains of life (including Homo sapiens) and that it is often located at catalytic or regulatory hotspots. Our findings will inform strategies for the design of proteins and peptides, as well as the development of new classes of drugs and antibodies that target the lysine–cysteine redox switch9,10. 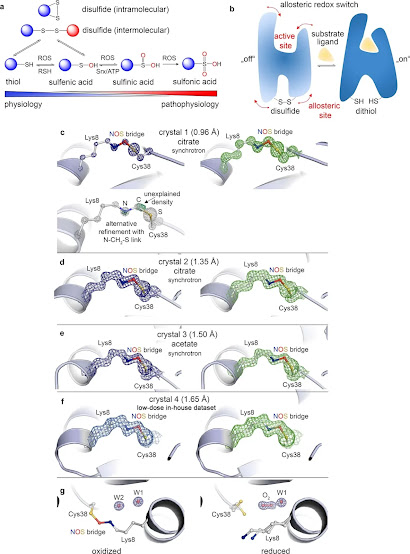