Ligand-directed bioconjugation strategies have been used for selective protein labeling in live cells or tissue samples in applications such as live-cell imaging. Here we hypothesized that a similar strategy could be used for targeted protein degradation. To test this possibility, we developed a series of CDK2-targeting N-acyl-N-alkylsulfonamide (NASA)-containing acylation probes. The probes featured three components: a CDK2 homing ligand, a CRL4CRBN E3 ligase recruiting ligand, and a NASA functionality. We determined that upon target binding, NASA-mediated reaction resulted in selective functionalization of Lys89 on purified or native CDK2. However, we were unable to observe CDK2 degradation, which is in contrast to the efficient degradation achieved by the use of a structurally similar reversible bivalent degrader. Our analysis suggests that the lack of degradation is due to the failure to form a productive CDK2:CRBN complex. Therefore, although this work demonstrates that NASA chemistry can be used for protein labeling, whether this strategy could enable efficient protein degradation remains an open question.

The role of quantum chemistry in covalent inhibitor design

The recent ascent of targeted covalent inhibitors (TCI) in drug discovery brings new opportunities and challenges to quantum chemical reactivity calculations supporting discovery efforts. TCIs typically form a covalent bond with the targeted nucleophilic amino acid side chain. Their reactivity that can be both computed and experimentally measured is therefore one of the key factors in determining inhibitory potency. Calculation of relevant quantum chemical descriptors and corresponding reaction barriers of model reactions represent efficient ways to predict intrinsic reactivities of covalent ligands. A more comprehensive description of covalent ligand binding is offered by mixed quantum mechanical/molecular mechanical (QM/MM) potentials. Reaction mechanisms can be investigated by the exploration of the potential energy surface as a function of suitable reaction coordinates, and free energy surfaces can also be calculated with molecular dynamics based simulations. Here we review the methodological aspects and discuss applications with primary focus on high-end QM/MM simulations to illustrate the current status of quantum chemical support to covalent inhibitor design. Available QM approaches are suitable to identify likely reaction mechanisms and rate determining steps in the binding of covalent inhibitors. The efficient QM/MM prediction of ligand reactivities complemented with the computational description of the recognition step makes these computations highly useful in covalent drug discovery.

Covalent PROTACs: the best of both worlds?

Covalent PROTACs combine the cutting edge research areas of targeted covalent inhibitors (TCIs) and proteolysis targeting chimeras (PROTACs). This nascent field of research has already demonstrated several interesting findings, and holds an immense amount of potential to expand the druggable proteome. In this opinion, we present some of these intriguing early findings and discuss the potential advantages and disadvantages of this approach.

Journal of the American Chemical Society 2021

Genetically introducing novel chemical bonds into proteins provides innovative avenues for biochemical research, protein engineering, and biotherapeutic applications. Recently, latent bioreactive unnatural amino acids (Uaas) have been incorporated into proteins to covalently target natural residues through proximity-enabled reactivity. Aryl fluorosulfate is particularly attractive due to its exceptional biocompatibility and multitargeting capability via sulfur(VI) fluoride exchange (SuFEx) reaction. Thus far, fluorosulfate-l-tyrosine (FSY) is the only aryl fluorosulfate-containing Uaa that has been genetically encoded. FSY has a relatively rigid and short side chain, which restricts the diversity of proteins targetable and the scope of applications. Here we designed and genetically encoded a new latent bioreactive Uaa, fluorosulfonyloxybenzoyl-l-lysine (FSK), in E. coli and mammalian cells. Due to its long and flexible aryl fluorosulfate-containing side chain, FSK was particularly useful in covalently linking protein sites that are unreachable with FSY, both intra- and intermolecularly, in vitro and in live cells. In addition, we created covalent nanobodies that irreversibly bound to epidermal growth factor receptors (EGFR) on cells, with FSK and FSY targeting distinct positions on EGFR to counter potential mutational resistance. Moreover, we established the use of FSK and FSY for genetically encoded chemical cross-linking to capture elusive enzyme–substrate interactions in live cells, allowing us to target residues aside from Cys and to cross-link at the binding periphery. FSK complements FSY to expand target diversity and versatility. Together, they provide a powerful, genetically encoded, latent bioreactive SuFEx system for creating covalent bonds in diverse proteins in vitro and in vivo, which will be widely useful for biological research and applications. 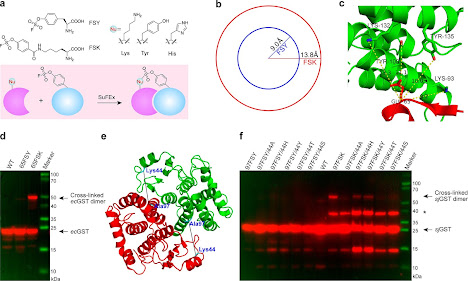