Deubiquitinating enzymes are a growing target class across multiple disease states, with several inhibitors now reported. b-AP15 and VLX1570 are two structurally related USP14/UCH-37 inhibitors with a shared α,β-unsaturated carbonyl substructure motif. Initially taken forward into a phase I/II clinical trial for refractory multiple myeloma, VLX1570 has since been put on full clinical hold due to dose limiting toxicity. Through a proteomic approach, here we demonstrate that these compounds target a diverse range of proteins, resulting in the formation of higher molecular weight complexes. Activity-based proteome profiling identified CIAPIN1 as a sub-micromolar covalent target of VLX1570, and further analysis demonstrated that high molecular weight complex formation leads to aggregation of CIAPIN1 in intact cells. Our results suggest that in addition to DUB inhibition, these compounds induce non-specific protein aggregation through cross-linking, providing a molecular explanation for general cellular toxicity.
at October 29, 2019

Some of the most widely used drugs, such as aspirin and penicillin, are covalent drugs. Covalent binding can improve potency, selectivity, and duration of the effects, but the intrinsic reactivity represents a potential liability and may result in idiosyncratic toxicity. For decades, the cons were believed to outweigh the pros, and covalent targeting was deprioritized in drug discovery. Recently, several covalent inhibitors have been approved for cancer treatment, thus rebooting the field. In this review, we briefly reflect on the history of selective covalent targeting, and provide a comprehensive overview of emerging developments from a chemical biology stand-point. Our discussion will reflect on efforts to validate irreversible covalent ligands, expand the scope of targets, and discover new ligands and warheads. We conclude with a brief commentary of remaining limitations and emerging opportunities in selective covalent targeting.
at October 22, 2019

Molecular glues are an intriguing therapeutic modality that harness small-molecules to induce interactions between proteins that typically do not interact, thus enabling the creation of novel protein functions not naturally encoded in biology. While molecular glues such as thalidomide and rapamycin have catalyzed drug discovery efforts, such molecules are rare and have often been discovered fortuitously, thus limiting their potential as a general strategy for therapeutic intervention of disease. Historically, natural products have proven to be important sources of molecular glues and we postulated that natural products bearing multiple electrophilic sites may be an unexplored source of such molecules, potentially through multi-covalent attachment. Using activity-based protein profiling (ABPP)-based chemoproteomic platforms, we show that members of the manumycin family of polyketides, which bear multiple potentially reactive sites, target C374 of the putative E3 ligase UBR7 in breast cancer cells to impair breast cancer pathogenicity through engaging in molecular glue interactions with the neo-substrate tumor-suppressor TP53, leading to the activation of p53 transcriptional activity and cell death. Our results reveal a previously undiscovered anti-cancer mechanism of this natural product family and highlight the potential for combining chemoproteomics and multi-covalent natural products for the discovery and characterization of new molecular glues.
at October 22, 2019

Electrophilic compounds originating from nature or chemical synthesis have profound effects on immune cells. These compounds are thought to act by cysteine modification to alter the functions of immune-relevant proteins; however, our understanding of electrophile-sensitive cysteines in the human immune proteome remains limited. Here, we present a global map of cysteines in primary human T cells that are susceptible to covalent modification by electrophilic small molecules. More than 3000 covalently liganded cysteines were found on functionally and structurally diverse proteins, including many that play fundamental roles in immunology. We further show that electrophilic compounds can impair T cell activation by distinct mechanisms involving direct functional perturbation and/or ligand-induced degradation of proteins. Our findings reveal a rich content of ligandable cysteines in human T cells, underscoring the potential of electrophilic small molecules as a fertile source for chemical probes and ultimately therapeutics that modulate immunological processes and their associated disorders. 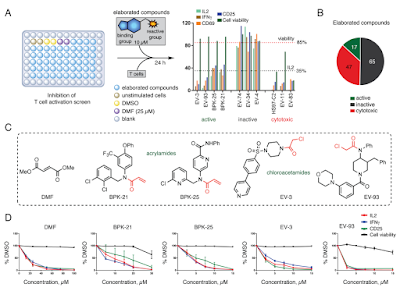 Isoforms of protein kinase Akt (Akt1/2/3) are involved in a myriad of essential processes including cell proliferation, survival, and metabolism. However, their individual roles in health and disease have not been thoroughly evaluated. Thus, there is an urgent need for perturbation studies, preferably mediated by highly selective bioactive small molecules. Here, we present a structure‐guided approach for the design of structurally diverse and pharmacologically beneficial covalent‐allosteric modifiers which enabled an investigation of the isoform‐specific preferences and the important residues within the allosteric site of the different isoforms. The biochemical, cellular, and structural evaluations revealed interactions responsible for the selective binding profiles. The first set of isoform‐selective covalent‐allosteric Akt inhibitors that emerged from this approach showed a conclusive structure‐activity relationship and broke ground for further structure‐guided development of selective probes to delineate the isoform‐specific functions of Akt kinases.