The proteome‐wide potential for reversible covalency at cysteine

Reversible covalency, achieved with, for instance, highly electron‐deficient olefins, offers a compelling strategy to design chemical probes and drugs that benefit from the sustained target engagement afforded by irreversible compounds, while avoiding permanent protein modification that persists following unfolding and/or proteolytic processing. So far, reversible covalency has mainly been evaluated for cysteine residues in individual kinases and the broader potential for this strategy to engage cysteines across the proteome remains unexplored. Here we describe a mass‐spectrometry‐based platform that integrates gel filtration (GF) with activity‐based protein profiling (ABPP) to assess cysteine residues across the human proteome for both irreversible and reversible interactions with small‐molecule electrophiles. Using this method, we identify numerous cysteine residues from diverse protein classes that are reversibly engaged by cyanoacrylamide fragment electrophiles, revealing the broad potential for reversible covalency as a strategy for chemical probe discovery.

Nimbolide, a terpenoid natural product derived from the Neem tree, impairs cancer pathogenicity; however, the direct targets and mechanisms by which nimbolide exerts its effects are poorly understood. Here, we used activity-based protein profiling (ABPP) chemoproteomic platforms to discover that nimbolide reacts with a novel functional cysteine crucial for substrate recognition in the E3 ubiquitin ligase RNF114. Nimbolide impairs breast cancer cell proliferation in-part by disrupting RNF114-substrate recognition, leading to inhibition of ubiquitination and degradation of tumor suppressors such as p21, resulting in their rapid stabilization. We further demonstrate that nimbolide can be harnessed to recruit RNF114 as an E3 ligase in targeted protein degradation applications and show that synthetically simpler scaffolds are also capable of accessing this unique reactive site. Our study highlights the use of ABPP platforms in uncovering unique druggable modalities accessed by natural products for cancer therapy and targeted protein degradation applications.
at June 24, 2019

Ligand-dependent protein degradation has emerged as a compelling strategy to pharmacologically control the protein content of cells. So far, however, only a limited number of E3 ligases have been found to support this process. Here, we use a chemical proteomic strategy that leverages broadly reactive, cysteine-directed electrophilic fragments coupled to selective ligands for intracellular proteins (for example, SLF for FKBP12, JQ1 for BRD4) to screen for heterobifunctional degrader compounds (or proteolysis targeting chimeras, PROTACs) that operate by covalent adduction of E3 ligases. This approach identified DCAF16—a poorly characterized substrate recognition component of CUL4-DDB1 E3 ubiquitin ligases—as a target of electrophilic PROTACs that promote the nuclear-restricted degradation of proteins. We find that only a modest fraction (~10–40%) of DCAF16 needs to be modified to support protein degradation, pointing to the potential for electrophilic PROTACs to induce neosubstrate degradation without substantially perturbing the function of the participating E3 ligase.
at June 24, 2019


Genetically introducing covalent bonds into proteins in vivo with residue specificity is affording innovative ways for protein research and engineering, yet latent bioreactive unnatural amino acids (Uaas) genetically encoded to date react with one to few natural residues only, limiting the variety of proteins and the scope of applications amenable to this technology. Here we report the genetic encoding of (2R)-2-amino-3-fluoro-3-(4-((2-nitrobenzyl)oxy) phenyl) propanoic acid (FnbY) in Escherichia coli and mammalian cells. Upon photoactivation, FnbY generated a reactive quinone methide (QM), which selectively reacted with nine natural amino acid residues placed in proximity in proteins directly in live cells. In addition to Cys, Lys, His, and Tyr, photoactivated FnbY also reacted with Trp, Met, Arg, Asn, and Gln, which are inaccessible with existing latent bioreactive Uaas. FnbY thus dramatically expanded the number of residues for covalent targeting in vivo. QM has longer half-life than the intermediates of conventional photo-cross-linking Uaas, and FnbY exhibited cross-linking efficiency higher than p-azido-phenylalanine. The photoactivatable and multitargeting reactivity of FnbY with selectivity toward nucleophilic residues will be valuable for addressing diverse proteins and broadening the scope of applications through exploiting covalent bonding in vivo for chemical biology, biotherapeutics, and protein engineering.

We have recently reported a series of Lys-covalent agents targeting the BIR3 domain of the X-linked inhibitor of apoptosis protein (XIAP) using a benzamide-sulfonyl fluoride warhead. Using XIAP as a model system, we further investigated a variety of additional warheads that can be easily incorporated into binding peptides and analyzed their ability to form covalent adducts with lysine and other amino acids, including tyrosine, histidine, serine, and threonine, using biochemical and biophysical assays. Moreover, we tested aqueous, plasma stability, cell permeability, and cellular efficacy of the most effective agents. These studies identified aryl-fluoro sulfates as likely the most suitable electrophiles to effectively form covalent adducts with Lys, Tyr, and His residues, given that these agents were cell permeable and stable in aqueous buffer and in plasma. Our studies contain a number of general findings that open new possible avenues for the design of potent covalent protein–protein interaction antagonists.

Protein arginine methyltransferase 5 (PRMT5) is known to symmetrically dimethylate numerous cytosolic and nuclear proteins that are involved in a variety of cellular processes. Recent findings have revealed its potential as a cancer therapeutic target. PRMT5 possesses a cysteine (C449) in the active site, unique to PRMT5. Therefore, covalent PRMT5 inhibition is an attractive chemical approach. Herein, we report an exciting discovery of a series of novel hemiaminals that under physiological conditions can be converted to aldehydes and react with C449 to form covalent adducts, which presumably undergo an unprecedented elimination to form the thiol-vinyl ethers, as indicated by electron density in the co-crystal structure of the PRMT5/MEP50 complex. 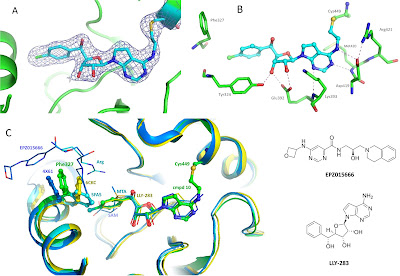 Exposure to organophosphorus compounds (OPs) may be fatal if untreated, and a clear and present danger posed by nerve agent OPs has become palpable in recent years. OPs inactivate acetylcholinesterase (AChE) by covalently modifying its catalytic serine. Inhibited AChE cannot hydrolyze the neurotransmitter acetylcholine leading to its build-up at the cholinergic synapses and creating an acute cholinergic crisis. Current antidotes, including oxime reactivators that attack the OP-AChE conjugate to free the active enzyme, are inefficient. Better reactivators are sought, but their design is hampered by a conformationally rigid portrait of AChE extracted exclusively from 100K X-ray crystallography and scarcity of structural knowledge on human AChE (hAChE). Here, we present room temperature X-ray structures of native and VX-phosphonylated hAChE with an imidazole-based oxime reactivator, RS-170B. We discovered that inhibition with VX triggers substantial conformational changes in bound RS-170B from a ‘non-productive’ pose (the reactive aldoxime group points away from the VX-bound serine) in the reactivator-only complex to a ‘semi-productive’ orientation in the VX-modified complex. This observation, supported by concurrent molecular simulations, suggested that the narrow active site gorge of hAChE may be significantly more dynamic than previously thought, allowing RS-170B to reorient while being bound inside the gorge. Furthermore, we found that small molecules can bind in the choline-binding site hindering approach to the phosphorous of VX-bound serine. Our results provide structural and mechanistic perspectives on the reactivation of OP-inhibited hAChE and demonstrate that structural studies at physiologically relevant temperatures can deliver previously overlooked insights applicable for designing next-generation OP antidotes.
at June 04, 2019

SMYD3 is a histone methyltransferase that regulates gene transcription, and its overexpression is associated with multiple human cancers. A novel class of tetrahydroacridine compounds which inhibit SMYD3 through a covalent mechanism of action is identified. Optimization of these irreversible inhibitors resulted in the discovery of 4-chloroquinolines, a new class of covalent warheads. Tool compound 29 exhibits high potency by inhibiting SMYD3′s enzymatic activity and showing antiproliferative activity against HepG2 in 3D cell culture. Our findings suggest that covalent inhibition of SMYD3 may have an impact on SMYD3 biology by affecting expression levels, and this warrants further exploration.